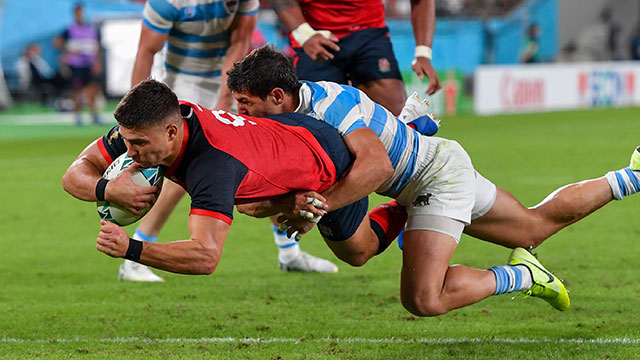 England capitalised on Tomas Lavanini's dismissal to secure their place in the World Cup quarter-finals with a comfortable 39-10 victory over Argentina at Tokyo Stadium.

The Pumas were forced to play 63 minutes with only 14 men after Lavanini was sent off by referee Nigel Owens for a high challenge in which he struck Owen Farrell's jaw with his shoulder.

It was the fifth red card of a tournament that is being played against the backdrop of World Rugby's crackdown on dangerous tackles and the second in which Farrell was the victim following the dismissal of the USA's John Quill in similar circumstances.

After showing early signs of using the setback to mount meaningful resistance, Argentina fell away as England attacked with width, Jonny May and Elliot Daly helping themselves to tries.

When the superb George Ford raced over shortly after half-time it was all over for the Pumas, who are effectively out of the World Cup after suffering a second defeat in Pool C.

A cloud hung over England's most impressive victory in Japan, however, after bulldozing number eight Billy Vunipola failed to appear for the second half due to concerns over his left ankle.

Tom Curry moved from blindside flanker to cover and the tenacious Lewis Ludlam stepped off the bench to bring renewed energy, while there were comebacks for Mako Vunipola and Jack Nowell - who made their first appearances at Japan 2019.

Nowell marked his first outing since starring at last season's Premiership final with a trademark tackle-busting try to put his ankle and appendix issues firmly behind him.

Questions will be asked why Farrell was not sent for an HIA after being flattened by Lavanini and the Saracens centre endured a wretched afternoon from the kicking tee, missing his first four attempts at goal before successfully adjusting his sights.

England have now won their last 10 meetings with Argentina, whose noisy and colourful fans cheered wildly as they made a swashbuckling start in pursuit of the upset that would keep their own quarter-final hopes alive.

Matias Moroni was the source of the first dangerous moment as turnover ball was fed to their little wing and he raced into space, only for May to win the chase for his chip ahead.

Pumas pressure was ramped up as Santiago Carreras was stopped just short of the left corner but once Benjamin Urdapilleta had landed a penalty, England responded when a driving maul provided the platform for Ford to send May over.

In a worrying sign for Argentina, Ford had expertly exploited a two-on-two attack and their concern escalated when they were driven backwards at a scrum.

Captain Pablo Matera was warned by Owens for a late tackle on Ben Youngs which incensed his former Leicester team-mate and sparked a large brawl.

Lavanini was not so lucky, however, as his high tackle on Farrell - in which he failed to wrap his arms around the Lion - was inevitably punished by a red card.

The drama deepened as Manu Tuilagi was sanctioned with only a penalty when taking out Emiliano Boffelli - but Argentina seemed inspired by the odds tilting against them.

Instead of wilting, they repeatedly attacked England with high energy but Eddie Jones' men were happy to soak up the pressure knowing they would soon capitalise on tiring legs.

That moment came earlier than expected when successive carries by May followed by a forward barrage on the line created space for Daly to score before Youngs scampered over in first-half added-time.

Five minutes after the interval and Argentina seemed a spent force as Tuilagi took a hard line into heavy traffic, opening a gap through which Ford accelerated to touch down.

England had emptied their bench and taken their foot off the pedal. Ford's intervention was their only score until Nowell crossed almost half an hour later, with a Moroni touchdown dividing their tries.

But Jones' men finished with a flourish when Luke Cowan-Dickie was swept over by a driving line-out and Farrell converted.